At this very moment, hundreds of thousands of dogs are living in filthy, inhumane conditions, often sleeping in their excrement and repeatedly bred until disease or mill operators end their lives.

Animal Rescue Corps has witnessed the horrors of puppy mill cruelty firsthand many times, including in November 2021 during Operation Revocation, a collaborative emergency rescue by Animal Rescue Corps, Animal Rescue League of Iowa, ASPCA, and other rescue partners of over 500 dogs from USDA-licensed breeder Daniel Gingerich in Iowa. Gingerich agreed to surrender all animals in his care after the U.S. Department of Agriculture (USDA) documented more than 190 violations of the Animal Welfare Act. The complaint against Gingerich, filed by the DOJ, detailed horrific conditions at multiple locations in Iowa where Gingerich kept dogs with untreated injuries and illnesses, like parvo and distemper, dogs with painful fur matting, dogs in confined cages with no water, and moldy food.

One of the dogs at Gingerich’s puppy mill was a golden retriever we’ve come to know as Goldie. 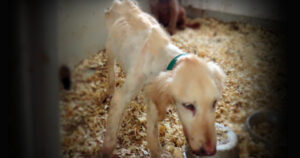 During an inspection of Gingerich’s puppy mill in April 2021, the USDA failed to document Goldie’s existence, much less the horrific state of her emaciated body or the inhumane conditions around her. So she continued to suffer. By the time animal welfare agents discovered her, it was too late. Due to her extreme emaciation, Goldie had to be euthanized on-site.

In honor of her memory and in hopes that no animal would suffer like her again, Representative Cindy Axne (D-IA-03) joined five other bipartisan lawmakers to introduce Goldie’s Act ( H.R. 6100).

The Importance of Goldie’s Act:

This legislation would help dogs in mills by closing loopholes in the Animal Welfare Act (AWA) and would mandate that USDA inspectors document and report all observed AWA violations, as intended by the law.

Specifically, Goldie’s Act would require the USDA to:

Be an Animal Advocate

Because of the advocacy of caring people like you, the horror of puppy mills has made waves in the news throughout the country and brought attention to this inhumane practice. You can take action right now to support animals by supporting Goldie’s Act. Here’s how:

I am your constituent and politely request that you cosponsor Goldie’s Act (H.R.6100). This bill would help upgrade the Animal Welfare Act (AWA).

This bill was named after Goldie, a severely emaciated golden retriever that had to suffer and die in one of the USDA’s problematic facilities. The Iowa facility, owned by Daniel Gingerich of Maple Hill Puppies, had more than 190 violations in 2021 alone. It took the USDA nearly a year to seize the animals after failing to report horrific abuse and revoke Gingerich’s license. Goldie was one of Gingerich’s victims who was euthanized on-site due to her skeletal condition.

Congress desperately needs to update the AWA which has not been ratified since 1966. Unfortunately, under the parameters of the AWA, the USDA is not taking action to penalize noncompliance or protect dogs that are suffering. No violators lose their license, and no one pays a financial penalty–even when dogs are left to suffer and die in their facilities. Thank you for leading the charge on this critical issue and advocating for animals.

Thank you for cosponsoring Goldie’s Act (H.R.6100), a bill to restore welfare to the Animal Welfare Act. This bill will prevent further animal suffering in puppy mills and hold the USDA accountable. Thank you for leading the charge on this critical issue and advocating for animals.

A Future Without Puppy Mills

By supporting Goldie’s Act and animal welfare everywhere, you can help stop this inhumane practice. Please share information about Goldie’s Act so that no animal needlessly suffers in puppy mills again.  Animal Rescue Corps strongly supports Goldie’s Act as we work toward a future without puppy mills.

About the Author: Animal Rescue Corps

Working to end animal suffering through direct and compassionate action and to inspire the highest ethical standards of humanity towards animals.