Declawing ban legislation has recently been passed in Maryland and will go into effect across the state in October. Maryland is now the second U.S. state to enact such legislation, joining New York. In California, proposed legislation to ban declawing is slowly trying to become law and has just passed its first committee hurdle. Many U.S. cities and many other countries have already banned this cruel and unnecessary amputation surgery.

Here at Animal Rescue Corps, we are celebrating these wins for cats: Animal Rescue Corps unequivocally opposes the brutal practice of declawing. A cat’s claws are necessary, and a crucial physical, social, and emotional part of who he or she is.

For many years, it was commonly assumed that declawing is an ugly practice, but one that may help to get more cats placed in homes. However, a growing body of evidence shows that this is simply not true – declawing does not reduce the number of homeless cats. In fact, evidence shows quite the opposite: declawed cats are both surrendered to shelters and euthanized in disproportionately high numbers, owing to the severe behavioral and physical complications that cats can be left with after these painful, harmful, and unnecessary procedures.

Supporting declaw bans is a great way to support the well-being of cats and reduce cat homelessness — a true win-win.

As one very good example of this evidence being demonstrated in real-time, the city of Los Angeles enacted a declaw ban in 2009. Last year, the Los Angeles Animal Services General Manager, Brenda F. Barnette, wrote to the Austin City Council in support of a proposed Austin ordinance to ban declawing, saying:

“Opponents to anti-declaw legislation often speculate that there will be a deluge of cats coming into the public shelters system if legal declawing is not available. This emotional claim is not supported by the hard statistics gathered by the Los Angeles Animal Services Department, which serves a city of over 4 million people. There were 26,942 owner-surrendered cats that came into the Los Angeles shelter system in the five years before the Los Angeles declaw ban went into effect, compared to 15,276 owner-surrendered cats in the five years afterward, a reduction of 43.3%.

In addition to protecting animals from harm, our ordinance has helped foster the growing knowledge and understanding that, in addition to the grossly inhumane procedure of declawing, declawed cats often develop behaviors that make them much less desirable as pets or cripple them for life. I attribute the decrease in relinquishment, noted above, of cats to our shelters to the decrease in behavioral problems, particularly biting and litter box avoidance, that are widely recognized to be the result of declawing and that are known to be reason for cats to be surrendered to shelters. We at LAAS strongly believe that a ban on declawing saves the lives of cats.” 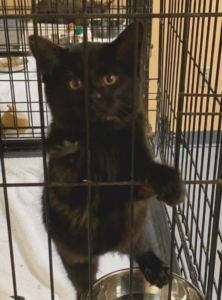 We at Animal Rescue Corps echo this: bans on declawing save the lives of cats, and claws make cats happy.

Never declaw your cat(s), and choose veterinary clinics that don’t declaw whenever possible.

And be sure to share with your friends and family why this is so important.

Thank you for being a protector of paws, cats, and animals everywhere.